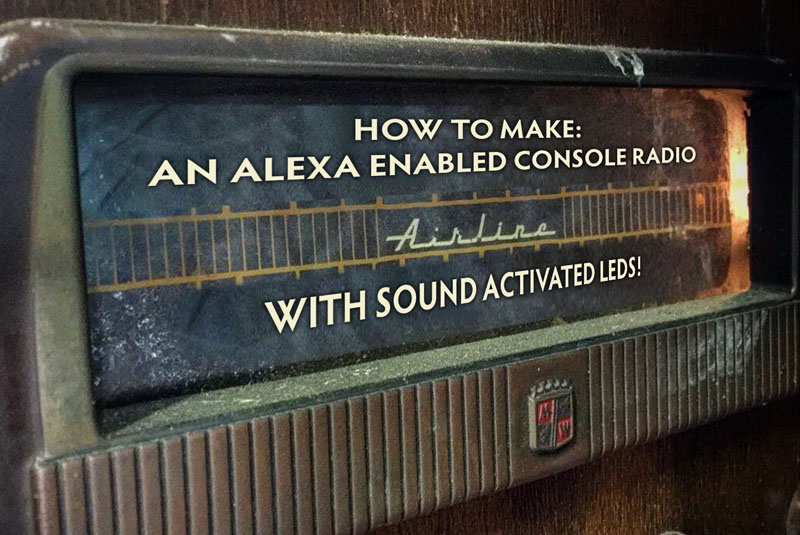 Have an old radio sitting around as a piece of “decor” because it no longer works? I do. Or did.

With the help of a few low cost components and some planning, this 1947 Montgomery Ward Airline console became a modern Alexa enabled device, with sound activated LEDs!

After over 70 years of use, neglect and storage, this radio has gone from AM/Shortwave to whatever Amazon Alexa/Echo based content your heart desires!

It’s a super simple project that anyone can do with only a few tools and materials. With a little creativity and elbow grease, anyone can turn a neglected box into a beautiful piece of functional decor.

For this project, I’ll use items that could be deemed trash, as well as repurposing others. In addition, we’ll need some supporting cast to pull everything off.

The heart of the project is, of course, the antique console radio. This one came with my first home, and has seen better days. Yours may be in better or worse shape, size, etc. You made need to refinish and repair part of the radio (like I did), etc. But the electronic “brains” will be the same regardless of what you stick them in.

The first step in bringing something back from the depths of long term storage is to clean it up. This console radio had become home at one point to some birds. Don’t worry, the nest was old and adandoned.

I set to cleaning it out and going over everything with the shop vac and and blast from the air nozzle. Once all the loose filth and grime had been removed, everything got a good scrub with clorox wipes before nourishing that sad veneer with some Murphy’s Oil Soap.

Overall, the carcass was “ok.” It had some peeling veneer that will have to be addressed, but didn’t require a full on restoration. At this point, I began removing what little electronics were inside. Surprisingly, the bulk of the radio is just a shell. I plugged it in for old time sake, and it lit up, then promptly began to release its magic smoke. Anyway, Most things are held in place with staples or 1/4″ hex screws, and very few at that. I found that the bezel/dial glass mount was part of the electronics components case, so I chose to gut it and reuse it for wire management. The old tubes still glow, and will likely see life again in another project.

The knobs got a good soak in some warm soapy water, and the dial glass a wipe with a lint free cloth. The screenprinted numbers and imagery are incredibly delicate, and will need restoring in a future revision.

Once the electronics had been removed, I was left with a blank canvas ready to be modernized.

The bulk of this project reuses many things I had on hand. A 2nd gen Echo Dot, some old PC speakers, misc. wiring and power blocks, etc. Honestly, the project could be complete just by hiding the echo and speakers in the shell and calling it good, but I wanted to take it a step further, and make the console radio “talk” to me through its dial. I wasn’t keen on opening up the Echo and tapping into it’s LED system, so I did a bit of brainstorming.

I recalled I had a Sparkfun sound detector board laying around somewhere and dug it up. Looking it over, it has a piezo mic for “input” and 3 different options for output: Audio, Envelope, and Gate. It needed 5v of power as well. I desoldered and removed the piezo mic from the board and replaced it with a couple of header pins. This got connected to a mono 3.5mm to bare cable to serve as the input, straight from Alexa. Removing the mic also means that ambient noise won’t affect it. I chose “Audio” for the output to drive the LEDs, as it seemed to work best and give me the effect I was looking for.

For the LEDs, I had some nice, warm, single color LEDs just waiting for a useful project to come along. This project utilizes them in two different ways: As the regular backlight, mimmicking the original radio (one on the left, one of the right, edge-lighting the dial glass) and a strip above the dial glass, that would flash as sound from Alexa was pumped through the sound detector. The LEDs are 6v rated, and driving them at the same 5v as the sound detector. The Strip that would be “responsive” received their power directly from the sound detector, as the output on the “Audio” pin ranged from 0v – 4.5v, perfect for some “talking lights.” I tested it as a proof of concept, then wired everything up out of the radio carcass to make sure what I’d tried would ultimately work as I wanted.

It did! Only one problem: With something plugged into the 3.5mm output on the Echo dot, it goes mute. I solved this with a simple splitter running to a set of speakers and to the sound detector board through a stereo to mono adapter.

I’ve provided wiring diagrams that illustrate exactly how everything is wired up. I joined my grounds, and my +5v to an old USB cable that would then be plugged into a power supply. All of the connections to the sound detector board are made with female jumper connectors, making them easily removable should I need to do so. I soldered all the joints then I used heat shrink tubing to insulate, tidy things up and make them a little more secure.

Step 4: Assembly of the Electronics

Once I had a working concept, I had to adapt it to fit the original housing and dial glass. Looking closely, I saw that the original bulbs were slip mounted and more or less edge lit the glass. Since my LEDs were adhesive backed, I chose to use the original bulbs as a place to mount the LEDs. This ensured they were in the proper place to reproduce the edgelit appearance of the original. I cut single LEDs from the strip, being sure to cut between the solder pads and mounted them to the bulbs. Once I had these in place, I cut a length of LEDs to fit across the top of the glass. I wired the side bulbs directly to the 5v power source, while the strip was wired to the “Audio” pin on the sound detector board.

At this point I had noticed that the brown background paper on the dial mount had lost some of its color. So before reinstalling the glass dial, I grabbed some brown construction paper, cut it to size, and affixed it with spray adhesive. Good as new.

I hooked everything up and powered up the Echo Dot and gave a command. It’s alive!! Time to put everything back in the shell and admire!

The last step of prepwork before I could put everything back in was to repair the veneer that had become delaminated and splintered. I used a combination of CA glue, wood glue, and masking tape to put the veneer back down. The wood glue does the bulk of the holding, while the CA glue gets a quick set. The masking tape holds everything firmly in place whilst the glues do their thing.

The only thing left to do now is to put the new brain into the old body. Since I’d chosen to use the original electronics housing, most of this was pretty straight forward. The Echo Dot, Sound detector, and LEDs were preassembled in the last step, and simply went back in and held in place the same as the original.

I then drove two screws to mount the power strip and plugged everything in. The last hurdle was mounting the speakers. I chose to install a shelf with a scrap board and some pocket holes to the plywood that held the original speaker. I tidied up the wires with a ziptie, then drove a screw down through each speaker’s base and into the shelf. She’s done! I plugged in the power strip to make sure everything still worked, and giggled like a school girl at the result!

The end result of the project was new life for an otherwise “nice looking but no longer functioning” 70 year old piece of furniture. It had seen better days, but will live on as my shop “radio” for years to come, thanks to a new brain and some modern technology. The best part about the project, it’s so easily adaptable to virtually any other vintage radio with a “dial window.” I absolutely love the way the Alexa “talks” to me through this radio. And with the way it is constructed, the audio source can be virtually anything with a 3.5mm output!

If you tackle this project, please let me know! I’d love to see how this creative community can run with this idea!

*Disclaimer: I get commissions for purchases made through links in this post.